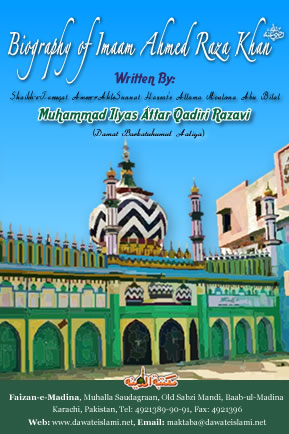 The Holy Prophet has said, `Whoever recites Durood Shareef upon me, I will intercede for him.` (Al Qaulul-Badi`, P117, Dar-ul-Kutub-ul-Ilmiyyah Beirut)

AlaHazrat Imaam-e-AhleSunnah, Mujaddid of the Ummah, reviver of the Sunnah, destroyer of bid`ah, scholar of Shariah, guide of tareeqah, fountain of blessing, Allama Moulana AlHaaj AlHafiz AlQari AshShah Imaam Ahmed Raza Khan was born on Monday the 10th of Shawaal 1272ah (14th June 1856) at the time of Salaa-tuz-Zuhr in a place

called Jasoli, which is in the city of Bareilly Shareef, India. The name corresponding to that year of his birth was Al-Mukhtaar. (Hayat-e-AlaHazrat, V1, P58, Maktaba-tul-Madina, Baab-ul-Madina Karachi) His birth name was Muhammad but his grandfather named him `Ahmad Raza`, and so it was by this name that he was famously known. (Al-Malfooz, Part 1, P3, Mushtaq book corner, Markaz-ul-Auliya Lahore)

Allah had blessed AlaHazrat with knowledge of great sciences. AlaHazrat wrote about fifty different types of knowledge and was an expert in every single science. AlaHazrat was such a professional astronomer and astrologer that he would set his clock just by observing the sun in the day and the stars at night. The time that he would set would always be precise and accurate with not even a minute difference. AlaHazrat was also a unique and remarkable mathematician. Once, Sir Zia-ud-Deen, vice chancellor of Ali Gar university, a prominent Mathematician of Indo-Pak Subcontinent, and holder of many international degrees, came to Imaam Ahmad Raza Khan . After greeting Imaam Ahmad Raza Khan , he asked the mathematician the purpose of coming. He answered, `I have come to seek help in solving a mathematical problem.` Imaam Ahmad Raza Khan asked, `What is the problem?` The vice-Chancellor explained, `It is not such an ordinary and easy problem that I can state it in such a way.` However, Imaam Ahmad Raza Khan again asked, `What is the problem?` The vice chancellor hesitantly presented the full complexity of the problem but to his astonishment, Imaam Ahmad Raza Khan solved the problem immediately! In a state of awe and shock at the speed of the solution that Imaam Ahmad Raza Khan had provided, he exclaimed, `My intention had been to travel to Germany for the solution but Professor Moulana Sayyid Suleiman Ashraf (Professor of Islamic studies) guided me here. It seemed as if you were observing the solution of this problem in a book.` When the vice-chancellor returned home, due to the impact of this experience, he grew a beard and became punctual in performing salaah and fasting. (Hayat-e-AlaHazrat, V1, P223-228, Maktaba-tul-Madina, Baab-ul-Madina Karachi)

Abu Haamid Sayyid Muhammad Khachauchi says that when people gave up finding the references for Fiqh in order to reply to questions, they would go to AlaHazrat who would provide the precise book references straight away. AlaHazrat would say, `look in rad-dul-muhtaar, so and so volume and so and so page, you will see the passage written down. It is written down in the book of Alamgiri, so and so volume, so and so page, so and so line etc.` When the people obtained the books, they would find the passage or sentence written down exactly as AlaHazrat had said. We can only say that this is surely God-given unique memory, that he knew even the `1400 year old books`, off by heart. (Hayat-e-AlaHazrat, V1, P210, Maktaba-tul-Madina, Baab-ul-Madina Karachi)

Memorising the Qur`an in just one month

Sayyid Ayub Ali states that one day AlaHazrat said, `Some people, out of unawareness, write `Hafiz` before my name even though I am not worthy of this title.` Sayyid Ayub says that on that very same day, AlaHazrat started memorising the Qur`an. The daily routine was most probably from after he made his wudu for Isha up until the time of Isha Jama`at. AlaHazrat memorised one Para (Chapter) every day and so finished the 30th Para on the 30th day. On one occasion, AlaHazrat said, `I have managed to memorise the entire Qur`an in the correct order just so that the people of Allah who assume that I am a Hafiz not are not proven wrong. (Hayat-e-AlaHazrat, V1, P208, Maktaba-tul-Madina, Baab-ul-Madina Karachi)

Love for the Prophet

From head to toe, AlaHazrat was an example of love for the Prophet . The love that AlaHazrat had for the Prophet can be acknowledged by reading `Hadaiq-e-Bakhshish`, in which every line of every page is proof of the fact that the most sacred thing in the world to AlaHazrat was the love of the Prophet . Every single verse which he has written praising the Prophet from the depths of his heart, testifies his immense love & admiration for the Prophet . AlaHazrat never ever wrote flattering poems in praise of a chief or a governor to persuade or convince them of  something, because AlaHazrat had whole-heartedly accepted the slavery, servitude and obedience of the Holy Prophet . He expressed this fact in the following verse:

Refraining from flattering the governors

Once, the poets composed poems in praise & compliment of the governor of Nan-Para (district Behraich-UP). Some people requested AlaHazrat to also compose a poem in praise of the Governor. In reply to this, AlaHazrat wrote a Naat Shareef which begun like this:

And in the last verse of his poem, AlaHazrat very elegantly writes,

AlaHazrat says why should I compliment the rich? I am a beggar of the gate of my merciful Prophet . My religion is not `Para-e-Naan`. `Para` means a piece and `Naan` means `Roti`, which metaphorically implies that I will not sell myself to the worldly kings.